Placed has released it’s monthly top 100 business ranking, based on in store foot traffic, for December.   This month’s big movers, highly influenced by the crucial holiday shopping season were almost entirely clothing and specialty retailers.  Led by Macy’s, whose 25 point month-over-month change is a Placed 100 record, the list included Bath and Body Works, Victoria’s Secret and of course Toys ‘R’ Us. 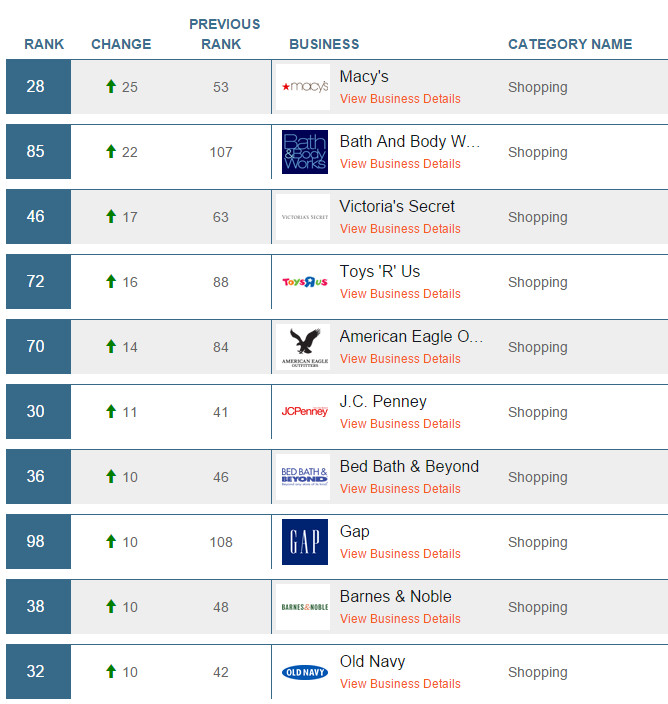 Another interesting story found in the results, comes by way of Sprint.  As detailed in Placed’s recent white paper, Sprint is in the middle of a massive “Cut your bill in half” campaign.  While Sprint did not gain in the rankings, they were able to remain constant while competitors all fell during the month echoing the white paper results.

The Automotive category took the biggest hit this December led by Auto Zone and Enterprise Rent-a-car, both dropping 11 points in the rankings.

On December 5th Sprint launched, “The Cut Your Bill in Half Event,” where consumers could bring a copy of their Verizon or AT&T bill to a Sprint store and their Sprint would cut their bill in half. Beyond the aggressive discounting, this promotion was unique in that it required a consumer to go into a Sprint store to complete the offer.

With the world’s largest opt-in location panel, Placed was able to directly measure the change in store visits to Sprint store as compared to the other wireless carriers. The results in the first two weeks were clear, this promotion is having a material impact in offline visits.

Download the White Paper, Foot Traffic Impact of Sprint’s ” The Cut Your Bill in Half Event” for additional details including corresponding TV spend.