Black Friday has been a long-standing American pastime, one that creeps closer and closer into Thanksgiving every year. For many Americans, it is accompanied by images of people shoving and trampling each other to get their hands on the hottest discounts, giving a redefined meaning to the term “door-buster.” And, according to the NRF, nearly 102 million consumers shopped in brick-and-mortar stores over the Black Friday holiday weekend this November, where the retail advertising buildup beforehand represented a billion plus dollars.

So, the decisive question remains—who were the retail winners and losers in the ultimate annual competition of reaching those 102 million consumers effectively? Placed and Kantar came together again to merge their intelligence and evaluate the amount of incremental store visits per dollar of advertising, measuring the success through the metric of ‘lift visits per ad dollar.’ This measure was then converted to an index scale, assigning an index of 100 to the highest lift visits per ad dollar and scaling all other values against it.

This year’s analysis revealed that consumers are on the prowl for the latest and greatest electronics, particularly when it comes to Black Friday deals. Best Buy came away as the winner: with $24.2 million of ad expenditures, Best Buy experienced a 125% lift in store visits, obtaining the top efficiency index of 100. In second place behind Best Buy comes JC Penney with an efficiency index of 75, claiming the top spot for the department store and mass merchandiser category. And when it came to the battle of Walmart vs. Target, it was pretty close: Walmart experienced an efficiency index of 65, with Target on Walmart’s tail with an index of 63. 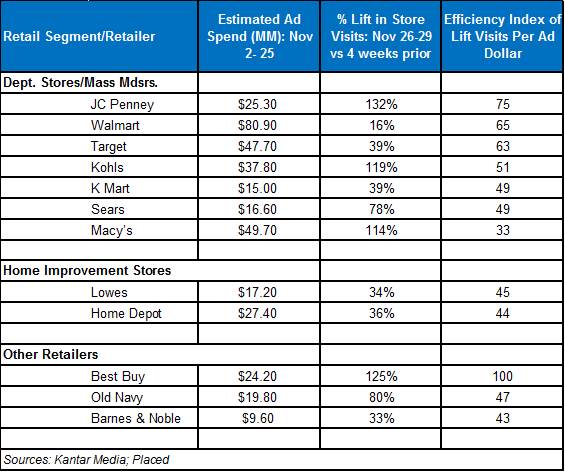