Through a unique combination of location ratings service data and custom survey data, Placed was able to directly measure the change in visits to Chipotle during the frenzy following the restaurant’s E. coli outbreaks.

By analyzing location behaviors of consumers sourced from our Placed Insights service over a 13-month period, the data shows a drop in monthly Chipotle visitation that directly correlates with the outbreaks. Chipotle’s share in monthly traffic hit a low of 8.04% during the month of January 2016, a full three months after the first initial outbreak, representing the lowest visitor share over the 13-month period.

On February 8th, 2016, Chipotle shut down its nationwide stores to retrain staff on food safety. At the same time, the company launched a campaign to reintroduce customers to the brand with free burritos. Coupons worth a generous total of $70 million in free burritos were given away.

The “reintroduction period” with the support of millions of free burritos proved to be a promising tactic as Chipotle’s visitor share in Placed Insights for February and March show a gentle spike. More specifically, the burrito coupons pushed March 2016 visitor share to a level almost as high as that of the previous year (8.81% visitor share in March 2016 vs. 8.86% in March the year prior). Overall, the promotion had a material impact in winning back Chipotle customers. 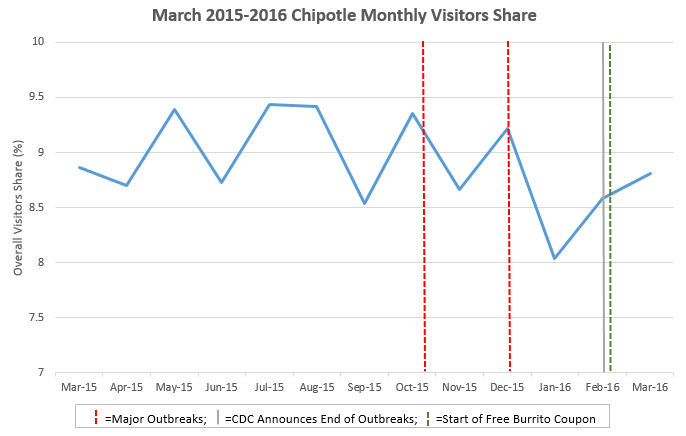 Digging deeper into Placed Insights data reveals restaurants that benefited from Chipotle’s recent turmoil. In terms of visitor share within the Mexican restaurant category, there were a few notable beneficiaries:

Looking beyond this category, Placed compared two leaders of the “fast-casual revolution,” Chipotle and Panera Bread. Examining overlap in visitation rates through November 2015, Panera Bread visitors were more likely to visit Chipotle than vice versa. However, in December 2015, the visitation points meet, indicating a shift in traffic from Chipotle to Panera.

To add some color and tell the whole story behind the numbers, Placed surveyed its audience on their most recent visit to Chipotle to find the ways that public sentiment has changed for the brand:

Measuring the success of Chipotle’s strategy through free burrito coupons, Placed discovered that visitors who are less likely to frequent Chipotle due to the E. coli outbreaks are more likely to use Chipotle coupons than visitors whose visitation has increased or remained the same: