Placed’s Top 100 Business Ranking List, based on in-store foot traffic, is now available for September. 35 businesses in total saw an increase in rank versus August, the two most prominent categories being Fast Food and Gas Stations & Convenience Stores with four businesses each experiencing a climb on the list. Dominos’s Pizza and FedEx tied for the lead in terms of month-over-month rank change, rising 6 spots on the list, closely followed by Baskin-Robbins and Popeye’s Chicken.

It’s no surprise that Domino’s Pizza tops the list, as the world’s biggest pizza delivery chain reported a bigger-than-expected 17 percent jump in quarterly revenue for Q3 2016, revealing that customers who pick up pizza at Domino’s are also increasing, in addition to just those ordering delivery. Domino’s Pizza is known for being a leader in digital ordering, while its chief competitor Pizza Hut reported a two percent decline for the same quarter. This change is seen as “an anomaly in the restaurant industry which has been plagued by slowing foot traffic and high competition.”

September’s Top 10 movers are below: 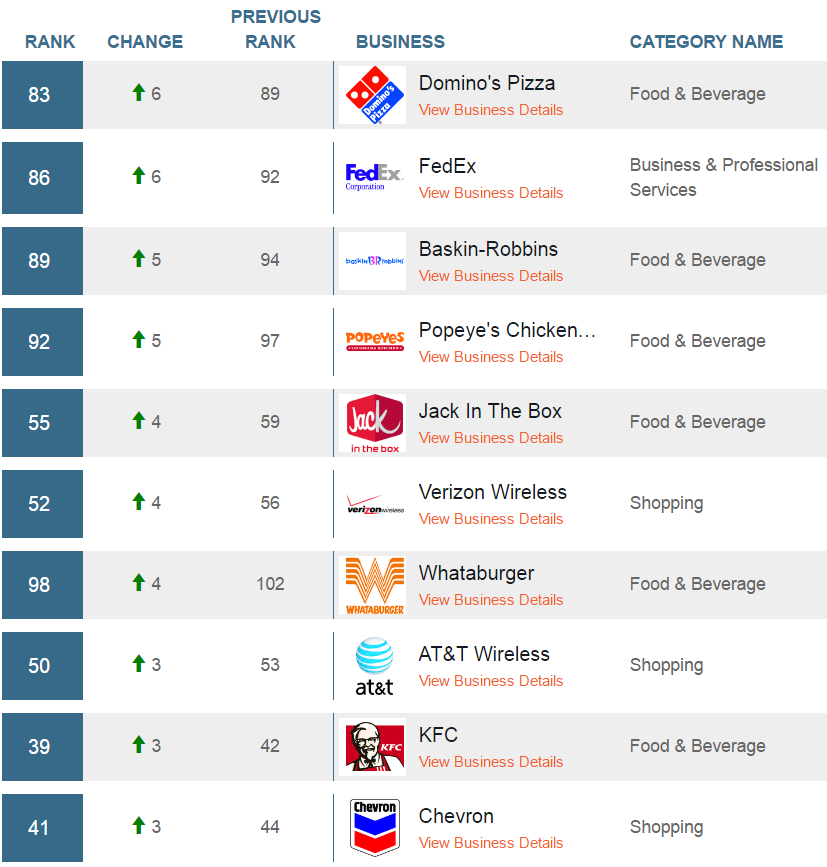 In terms of the biggest hits in rankings this month, it was the Retail category that experienced the biggest drop in rankings (American Eagle Outfitters, Ross, J.C. Penney, and Victoria’s Secret), likely due to the back-to-school shopping uptick in August. J.C. Penney, who isn’t set to announce third quarter earnings until Friday November 11th, is an interesting position to see if this decrease in rankings is narrowing as their progress towards rebuilding continues.