For those of us interested in the retail space, foot traffic, or simply business in general, the closure of major retail stores like Sears and Kmart is a big deal. Both rank in the top 10 for visit share in the “Department Store” category. That’s a lot of visitation, so as their presence diminishes, other stores stand to gain considerable business. To get an idea of where that might be, we can use Placed Insights to examine two key visitation metrics: customer overlap* and customer affinity.**

While Sears and Kmart are not completely similar (Sears is a mall-based department store while Kmart is geared toward bargain shoppers), they do share a lot of visitation with two other major department stores. Among Sears, Kmart, JCPenney, and Kohl’s, we saw customer overlap between roughly 19-25% last quarter. It wouldn’t be surprising to see more shoppers turn to these stores after Sears and Kmart close.

More specialized stores may also see an increase in foot traffic. Sears is known for carrying a broad range of products including electronics, appliances, lingerie, and athletic shoes. Three distinct competitors with significant customer overlap or customer affinity with Sears includes Best Buy (27%), Victoria’s Secret (20%) and Finish Line, which has a 1.53 Customer Affinity index with Sears.

Dollar-branded stores such as Dollar Tree and Dollar General both stand to gain Kmart foot traffic. Both are in the top 3 in terms of customer overlap, with 37% and 24% respectively. Discount retailers Five Below and Big Lots may also gain customers, as they have a Kmart Customer Affinity Index of 1.26 and 1.23 respectively.

*Customer overlap is the percentage of all visitors to one business (i.e. Sears) that also visited a second business (i.e. Kohl’s) in a given time frame.

The ubiquity of mobile devices has dramatically changed the landscape for restaurant advertising, particularly for Quick-Serve (QSR) and Fast Casual. No longer constrained to the desktop, digital advertisers have embraced the possibilities of mobile data and continue to do so—digital ad spend measured by Placed for QSR and Fast Casual increased by over 1,000% between 2014 and 2018.

In this new paper from Placed Research, we explore unexpected and useful insight gained through nuanced location analysis that can be used to guide advertising strategy:

Placed, the leader in offline omni-channel attribution, is closing out 2018 with the launch of a reimagined interface for attribution reporting.

The effort represents months of collaboration between Placed and its partners to provide a better view into the role of foot traffic in advertising campaigns.

“We believe that self-service and the accelerated adoption of location based attribution go hand in hand,” says David Shim, Founder and CEO at Placed. “The redesign of Placed Attribution will empower our clients to take full advantage of our industry-leading digital, TV, and out-of-home reporting data.”

The new tool boasts interactive visualizations and dynamic datasets that put you in control of the experience. Users can also explore campaign results from any device, highlighting Placed’s commitment to making visitation data more accessible for all stakeholders.

Existing partners and advertisers can experience the UI immediately at Placed Attribution.  To learn more about Placed and demo the new UI, please reach out to us at sales@placed.com.

Placed’s Top 100 monthly rankings of most visited businesses has been published for January 2017. The top categories to experience a climb in rankings this month include Automotive, Gas Stations, and QSR’s. Enterprise rose 17 spots to the 100th most visited business in January, whereas Sonic, Dairy Queen, and Valero each climbed 16 spots.

Dairy Queen, in addition to Baskin-Robbins (which increased by 15 ranking points) should be no surprise this month, as January marked the 18th warmest one on record in 123 years in the contiguous US.

Chevrolet Dealers and Ford Dealers, which each rose 11 spots and 9 spots respectively, experienced growth in foot traffic as January is tagged a favorable month to buy the most recent models of cars–sales are typically slow, and manufactures increase the price tag as the year goes on. 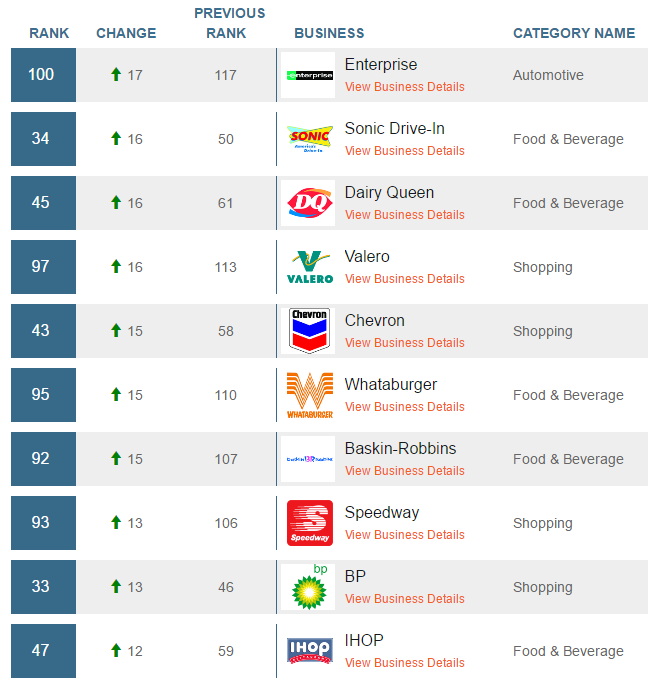 In terms of the biggest hits in rankings this month, the 25 businesses that experienced the largest drop in rankings all spanned the Retail category, a predictable trend given the end of the holiday shopping season. Retail businesses that declined the least in January 2017 rankings include The Home Depot, Dollar Tree, and the UPS Store, which each only dropped one spot from December. The 10 businesses to experience the largest declines on the list can be found below: 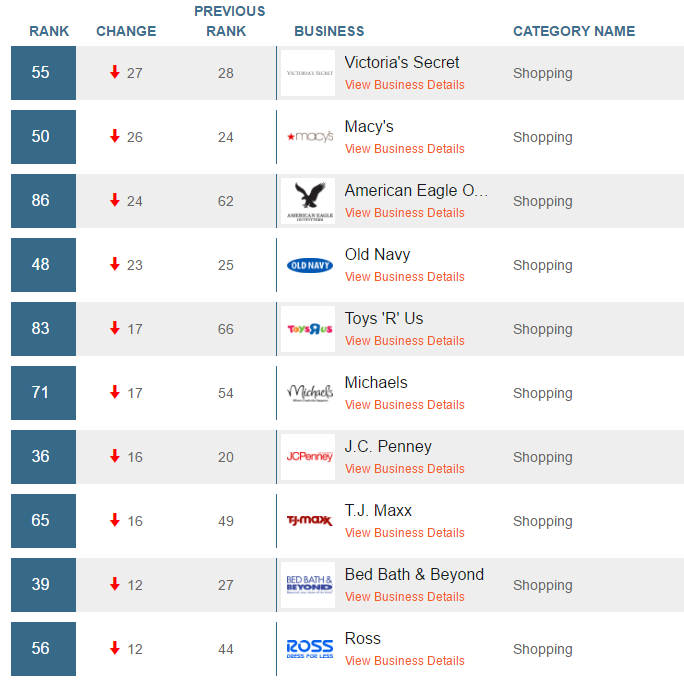 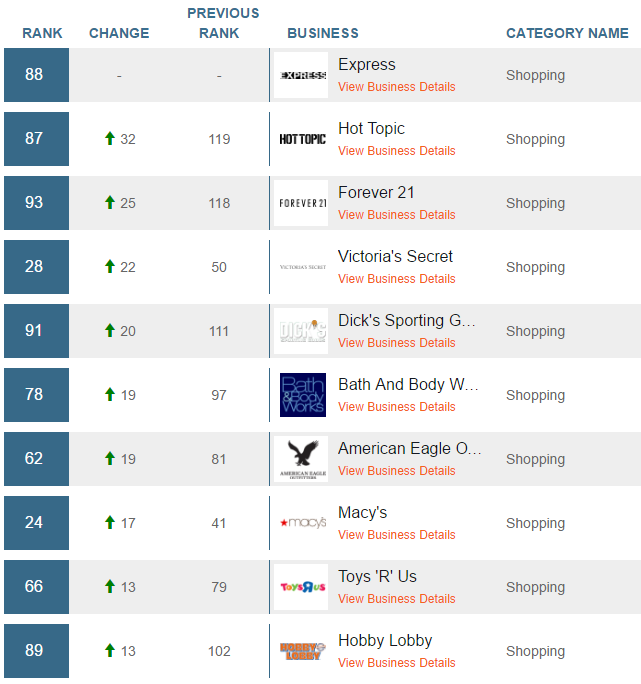 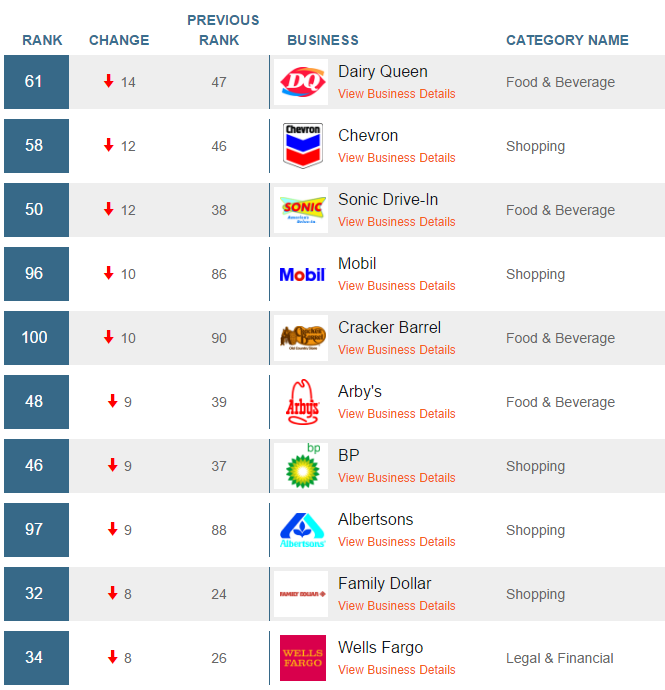