The dust has settled on Black Friday and early reports are touting the record-breaking billions spent by consumers. But which retailers were the most successful at turning the Black Friday hype into a flood of in-store foot traffic?

In order to better understand how Black Friday retail fared this season, Placed took a look at shoppers’ behaviors utilizing our location analytics platform to determine this season’s early top gainers. This data is an aggregation of opt-in panelists from the Placed Panels pilot participants.

The study found some interesting, and rather surprising results:

Although the online channel continues to grow its share of the retail transactions, offline sales still reign supreme driving more than $9 in every $10 retail dollars spent. With the lack of offline insights into shopping behaviors though, one would think the share of dollars was reversed between the offline and online worlds. Quantifying actual shopper foot traffic unlocks a wealth of insights into consumer behavior, retail market share, and competitive intelligence, providing the potential to significantly impact the bottom line for retailers not only during Black Friday and the holiday shopping season, but all year long.

This article originally appeared in Adotas. 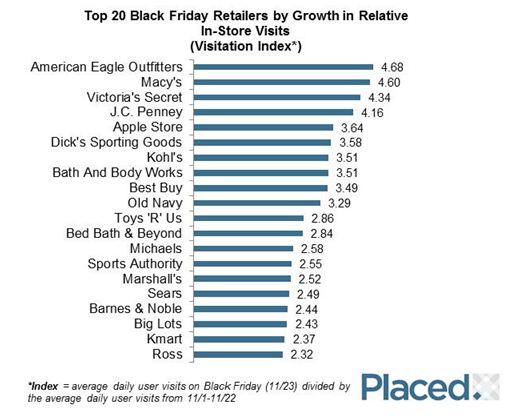