As news reports filtered in of the possible severity of Hurricane Sandy, many people along the east coast spent days preparing for the storm that unfortunately lived up to many forecasters’ worst predictions.

In order to understand the effects of Hurricane Sandy on people’s activities in the physical world, we analyzed the behaviors of opted-in panelists via their mobile device who were located in the affected regions of New York City and along the New Jersey coast.  This data is an aggregation of pilot participants of Placed Panels and is not necessarily representative of the general population.

Intuitively, one would correctly assume that grocery and hardware store visits would increase, but for the first time these assumptions can now be validated with quantifiable metrics. By contextualizing these assumptions, Placed observed interesting shifts in behavior ahead of the storm.

People in these impacted areas were nearly 4X more likely to visit a grocery or hardware store during the weekend of October 26 – 28, when compared to the monthly average, as many people stocked up on food and supplies in anticipation of the storm.  People were also more than 2X as likely to visit gas stations and convenience stores during those three days as they made their way out of town or filled up in anticipation of post-storm shortages. 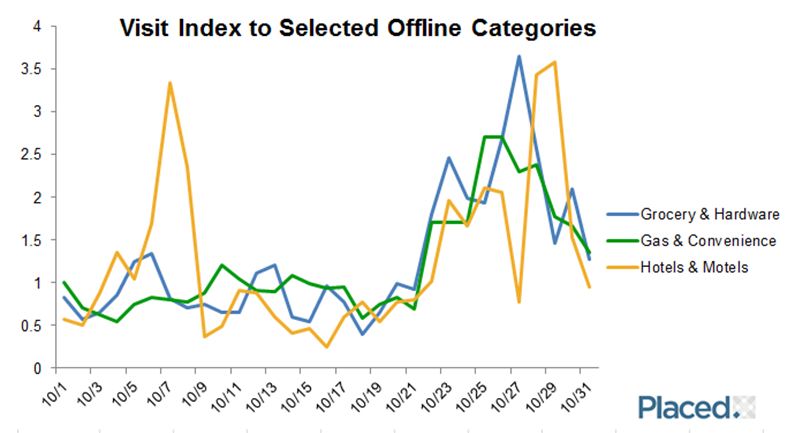 As the storm made landfall on the 29th though, Placed saw a precipitous drop in visits to grocery and hardware stores as many people hunkered down at home. Additionally we saw a more gradual decline in relative visitation to gas & convenience stores. The day of the storm saw visits to hotels & motels increase by fourfold as many sought refuge away from their homes. The uptick in hotels & motels from October 5th to the 8th was associated with the Columbus Day holiday weekend.

Often overlooked, Placed analyzed the places people were less likely to go as the storm approached.  Placed found restaurants, gyms and places of worship all saw around three-fourths less relative visitation during the weekend of October 26 – 28 compared to the monthly average for these activities.

Taking a deeper dive into the places people visited during the weekend of the storm’s approach, we saw that people in these impacted areas were nearly: 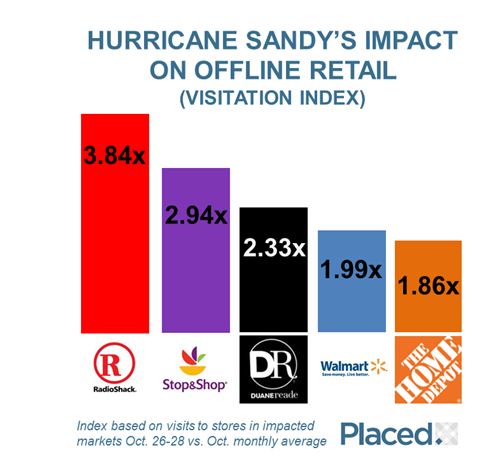